And the season is here!

Well yes, the autumn is almost gone and it’s the winters unfolding. On this mother earth, the life has been created in such a way, that both get’s entwined in each other’s glory. Without going into a vast diversity of life on earth, let’s bring the concern on the Homo Sapiens. Other than the outside factors, there is something internal that gives us those kind of entwined feelings with the seasonal change.

That’s the appetite 🙂 Our appetite gives its gastronomical cravings through the taste buds, for the changing season. With the temperature falling down, we do crave for those culinary delights, which are aromatic, delectable and exotically rich in flavours.

From the India, one of such regional food that is to be savoured with the chillness in weather is the Kashmiri cuisine. Just like its picturesque beauty, the food in Kashmir is heavenly. From the valley of purity, the culinary delights are all about the variant Indian spices to match the vibrancy of the mother nature. The rich and redolent dishes steeped in traditions have been evolved through many generations and are known to be a blend of three different cooking styles – that of Kashmiri Pandits, Muslims and Mughals. Doing wonders to our taste buds, these mouth watering dishes from the very loved Kashmir, are very much satiating to the winter appetite.

Talking of winter appetite and the Kashmiri cuisine, I was invited by Sankalp Vishnu for the blogger’s tasting event of Kashmiri Food Festival at Over The Moon Brew Company, Gachibowli, Hyderabad.  I knew, that it’s a must attend event. Curated by renowned MasterChef Sanjay Raina who has his roots belonging to the one of the most beautiful destinations of the world, Kashmir. The ceremonial feast of Kashmiri is primarily known as Wazwan; Waz means ‘chef’ and wan means ‘an array of meat curries’. Traditionally it has 36 course banquet.

OTM Kashmiri Food Festival has come up with quintessential delicacies from the paradise on earth, which are absolutely ecstatic culinary output of the renowned Chef to bring the best of the Wazwan, if not the whole. Tabak Maaz, Gushtaba, Rogan Josh, Kashmiri Alu Dum and much more, very much with the equivalent elegance of flavours.

Speaking of appetisers, Tabak Maaz was absolutely delightful. I am amazed with the culinary extravaganza on the world. The tender meat cooked without much spices and eventually enhanced in it’s own flavour, absolutely captivating. Moving on to the Sheekh Kebabs, very well cooked. When the Mutton Sheekh Kebab was flavourful, the Veg Sheekh Kebab was deliciously soft. Chicken Kanti & Paneer Kanti, the wholesome Indian version for the manchurian (if we call so, visually). Cooked with the Indian tadka of onions, tomato and garlic, keeping it soft and enhancing with the variant Indian spices. Loved both the versions of it, but if asked about one, the veg version gets the score. Loved the Paneer kanti, definitely very much different from what we get to eat any other paneer appetiser. We were also served, Veg Shammi kebab. I must say, the flavours were perfect.

The main course was a feature. The moment, the dishes were served at the blogger’s table, we were elated with the aroma around. Goshtaba, the first tasted dish from the main course and definitely counted in one of my favorites of the meal. The quintessential Kashmiri delicacy was nailed for it’s right on flavours and right on cooking. The meatballs were the absolute delight to my taste buds that I actually kept a portion of it to end the main course with. The gravy was light yet flavourful. Mutton Rogan Josh was decent to it’s course. I would recommend them to bring it on towards the softer and tender texture. Yellow paneer was a almost regular paneer delicacy. Oh, the lovely vegetarian food lovers, you have something mindblowing for your palette. And that’s Khatte Baingan! Well, that was kind of tickling tangy and spicy, culinary stunner to my taste buds and definitely a very much loved rather adored dish by all the blogger’s there, who are predominantly the meat lovers. Mucch Kofta, the meatballs(actually the sausage structure) of the minced meat; I don’t remember anyone much talking about it. Ask me, and I absolutely loved it ; ohh, I suppose I was too engrossed in eating, a mindful eating 🙂 Said that, mindful eating is part of wellness, and then I could make it on #WellnessWednesday 😉 Next was Nadru Yakhni; okay lets deconstruct here. I loved the yakhni part, nadru(lotus stem) had to be cooked well. The yakhni was flavourful, but those flavours couldn’t make it’s way to the Nadru 🙂 I infact had to leave one of the two pieces of Nadru on my palette but I had all of the yakhni (the gravy) with the Kashmiri Pulao. I decently liked the Kahsmiri Pulao. If not too extravagant, can be eaten peacefully. 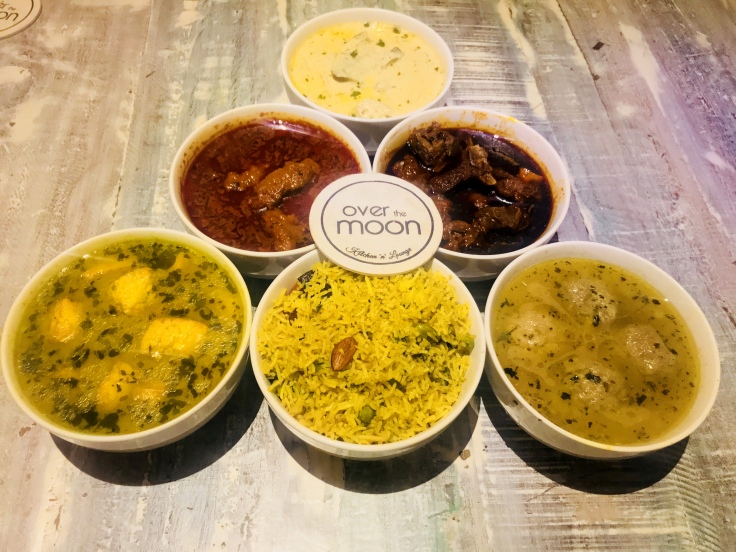 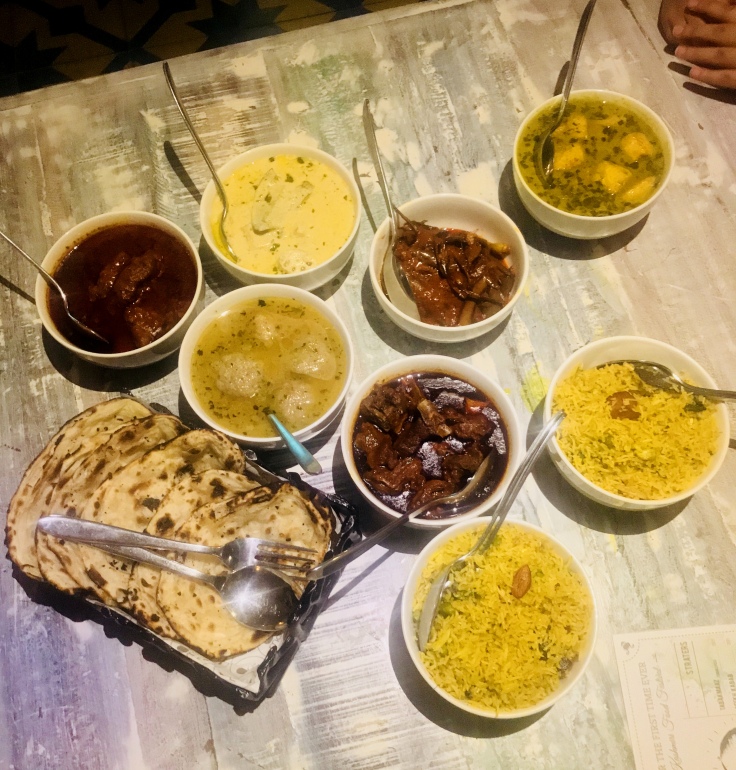 And then, the Dessert. I always, always recommend to all the foodies, food lovers , don’t miss on the dessert, however full you are, specially when it’s a full course meal. Even just a spoonful of dessert can do it’s justice 🙂 . Saffron phirni, the dessert of the food festival. Flavour of saffron was distinct and definitely made the dessert foodie worthy. Though they can work on thickening the consistency.

Well, I am finally done with the food details. Yes, Kashmiri Food Festival is definitely worth for its experience.

The festival is on till 5th November 2017. The food festival is part of lunch buffet for tomorrow which is INR 550 AI and a part of A La Carte dinner till 5th Nov. For prior reservation or any enquiry, do give a call to the restaurant.

Being at the southern part of India, and could relish on the culinary delicacies from the North and that too from the paradise on earth, is absolutely a cherishing experience. Goodfood is quintessential part of the goodtimes and the cultural experience.

“Create your GoodTimes, Live the GoodTimes!”