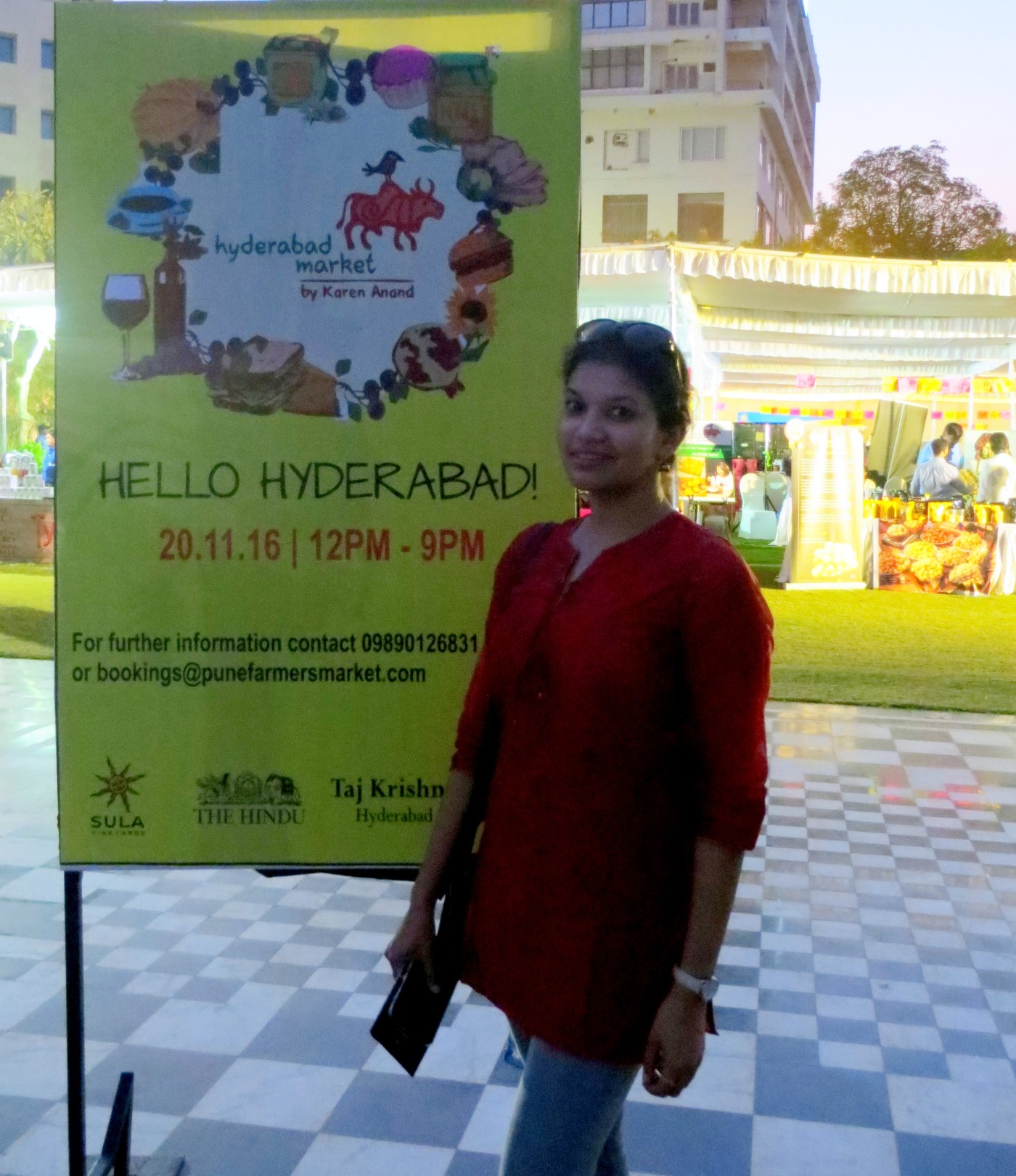 Food festivals? … the thought of that brings me so much anticipation; what all will be a part of it; how would be the quality; as a food taster, when I am giving it a ‘go ahead’, anticipating that the customer will also enjoy it.

That’s what I was exactly thinking about when I eventually came across this event advertisement, “Hyderabad Market by Karen Anand at Taj Krishna”, on 20th November 2016.

At that time, pretty much unaware of Karen Anand; I googled, “who is Karen Anand?” And, one of the sources mentioned, “Martha Stewart of India”; it also said, “she is the culinary explorer, travelling the world, unearthing wondrous stories about food, the region’s cuisines, health angles, and writing about it.” I was like, myself being in the journey of the Goodtimes, where food is such an integral part and am not even aware of this lady from India. Then I conceded and agreed to the ground level, that knowing and exploring is unending. It’s only a journey; an ongoing journey to seek, and end up seeking more.

Next my question, “what’s this market is going to have?”; something out-of-the-ordinary; or, something balanced? Is it a food fest or a market? The only detail I got to know was about a few known restaurants line up. Ohh yes, she is known for her gourmet skills which she learned while travelling the world. And, I got my guts right there, “travel and explore” 🙂 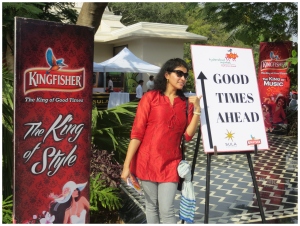 Karen Anand is the pioneer of Pune Farmer’s Market. Karen has already nine cities with her Farmer Markets and Hyderabad was the newest addition. In a discussion with The Hindu about her idea, she mentioned that for her market she decided not to go fully organic, knowing the fact that there are already some Sunday markets in the city, which sell organic produce and products. Her motive for Hyderabad market was to encourage more entrepreneurs. Said that, she found out the players who specialise in whole foods and do it the natural way but don’t have the organic certification. She stayed by being fair to all.

The event happened at the gardenia of Taj Krishna. And I never visited Taj, previously. I never attended a “food festival” before; rather a gourmet. The registration was free and the tastings were free. They had the restaurant line-up of city’s new sensation Malaka Spice, know for South-east Asian Cuisines; Olive Bistro – my favourite and city’s most popular Italian/European dining; Soda Bottle Openerwala – a national brand name for the Parsi Cuisine restaurant; Taj Krishna’s very own Golden Dragon with fantastic Chinese food! They also had the chilled beer at only Rs. 100 and a variety of premium Indian wines from Sula Vineyards to sample as well as purchase. Does one need any more reason ? 🙂 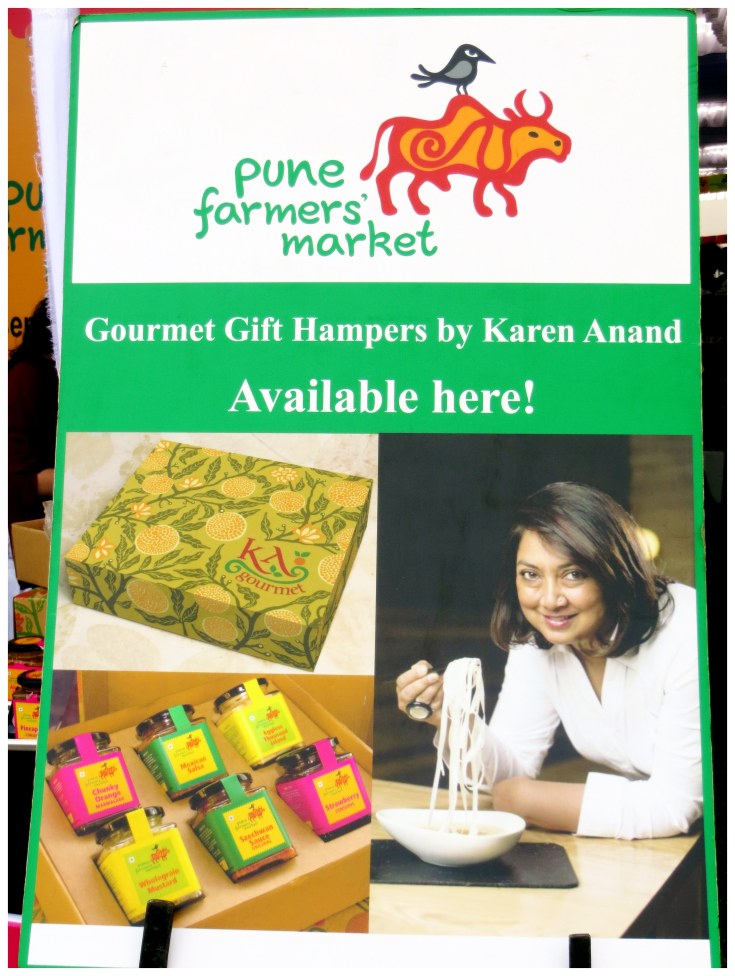 Karen along with her son Sasha Anand, had put up a Burrata station. It is her travel adventures that lead her to the new players of the international food industry. One of such travel introduced her to a priest in Bangalore, who was trained in a Benedictine monastery in Italy, to make Burrata cheese. 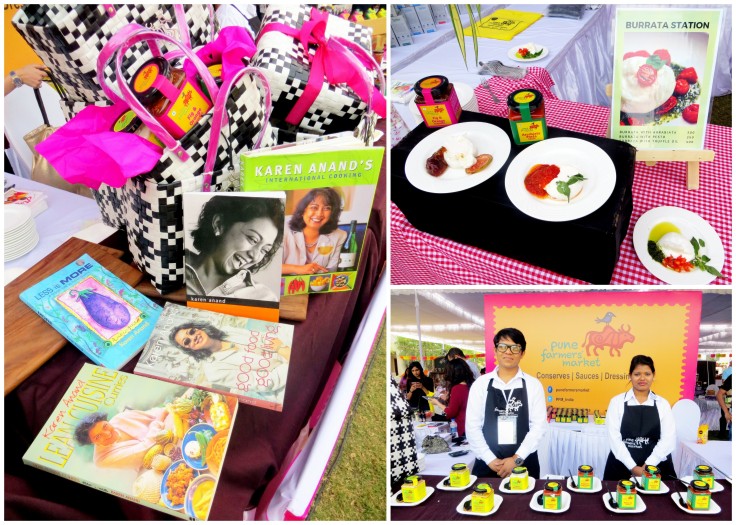 For those who are yet to discover Burrata, it’s a fresh Italian cheese made from mozzarella and cream. The outside thin shell is a pasta filata curd while the insides contain a soft, doughy, stringy, mixture of curd and fresh cream. The cream has a rich flavour and has to be eaten immediately since it is a fresh cheese. Burrata is usually served fresh at room temperature and beyond 48 hours, it is considered past its prime. The taste of Burrata goes well with salads, crusty bread, and prosciutto, fresh tomatoes with olive oil and with spaghetti.

Out of 2 different combinations, I chose to taste the Burrata cheese with Arrabiata sauce and Basil. I adore Cheese and always want to go for cheese tasting and this one I consider the start of it all. I loved it, but to be honest, definitely not among the ones that won my heart. Getting to have my experience with Burrata, it was exactly as it’s described above.

I also had the opportunity to have a chat with Karen and know about her plans, fondness and the vision about the food industry. Speaking about the food industry, 5 years down the line, she feels, “As a mass market, it will always be regional and full of spices, which is satisfying; but the movement for health and provenance is growing and pleasant, even if not huge.”

As said, there were also stalls of whole foods (organic and non-organic), ayurvedic products, kitchen essentials, beer and wine and all these along with some live music. Here are few pictures of the event: 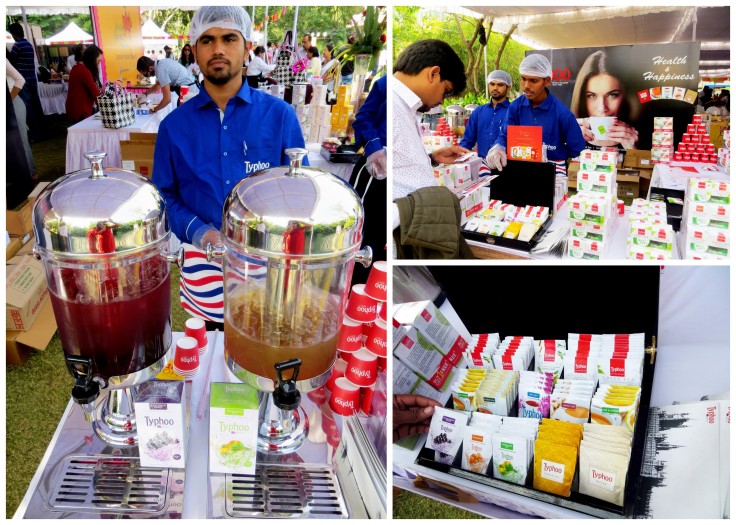 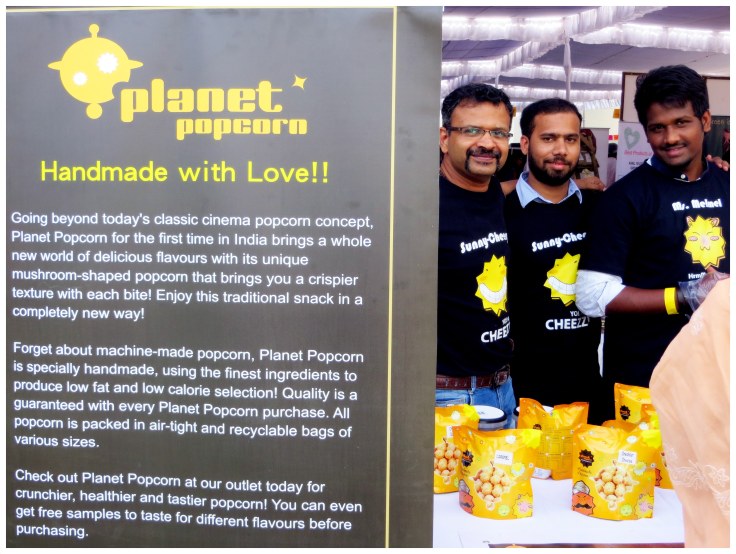 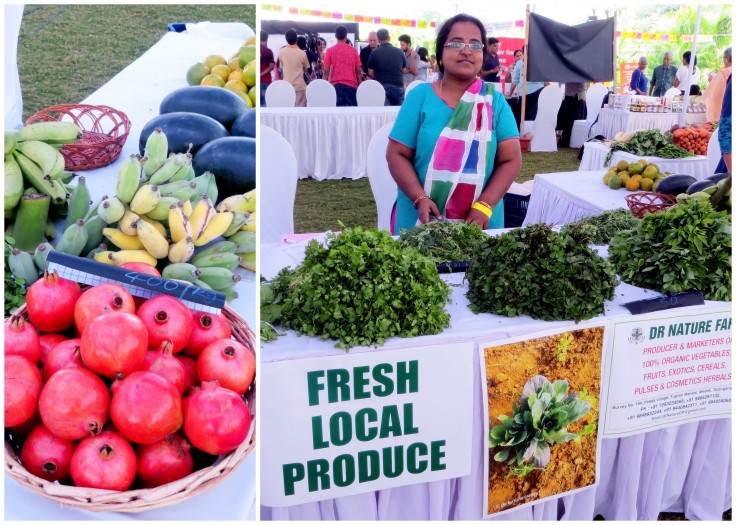 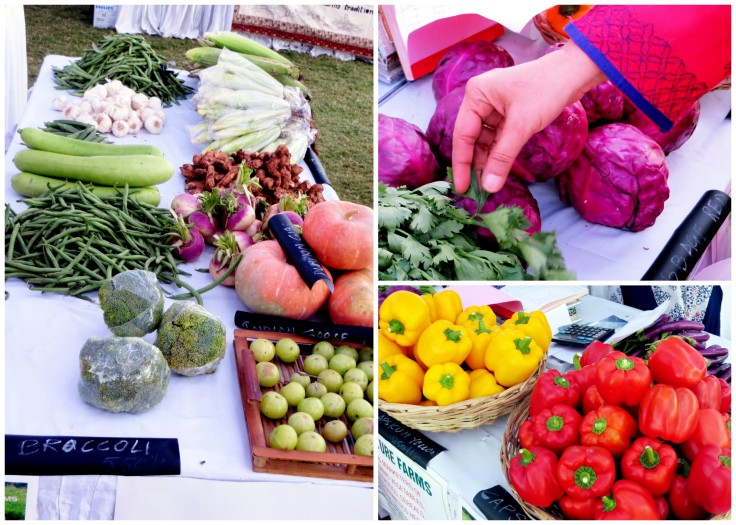 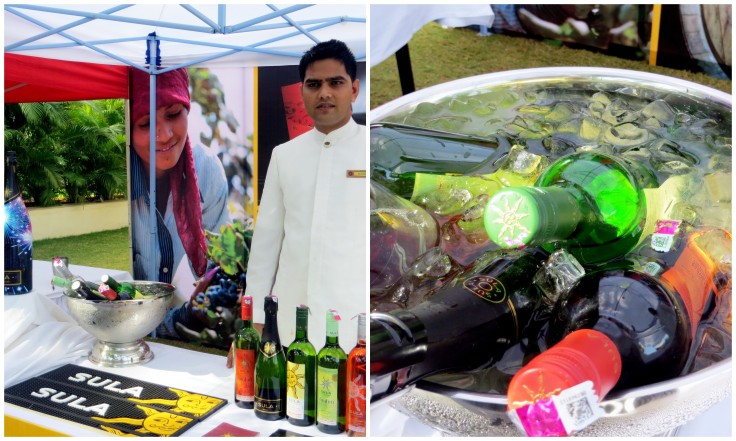 There were young, there were old; singles, couples, kids; this couple was just eating, and I asked, “can I take a pic of both of you?” The lady replied, “Ohh, yes; why not 🙂 Wait, first tell how I am looking?” I told, “beautiful 🙂 ” The man with her, “Ohh, you just told her; and not to me 🙂 ” I told, “you are looking very smart 🙂 ” Both of them came a little closer 😉 , and asked “Yes, pls take the pic; we are looking awesome right 🙂 ” . I captured; not only in the shot but also in my memories; how to live the Goodtimes forever, with the special one 😉 Love is the feeling 🙂 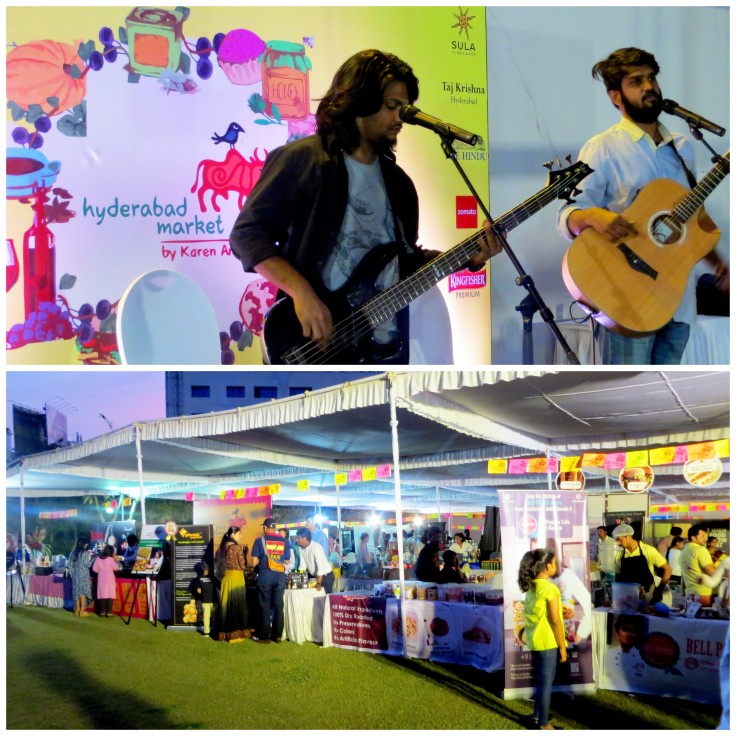 Live Band performance in the evening

For a meal we had this veg-biryani from the Soda Bottle Opener Wala counter; and folks, this is one of the best veg biryani, I ever had. Absolutely, drooling. The winning factor for the taste of this veg biryani was the golden-fired onion , added to it, separately. 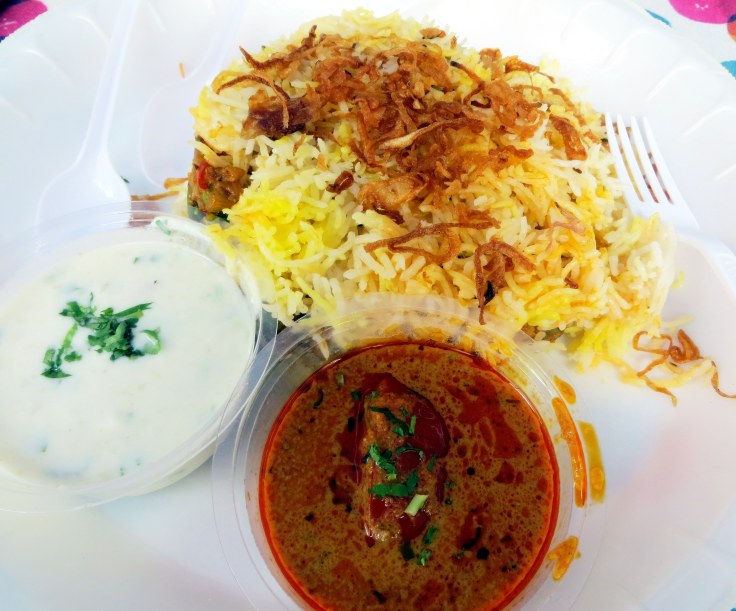 That Sunday was definitely an eventful one. With all these, I got beautiful memories and part of that are few first-timers. 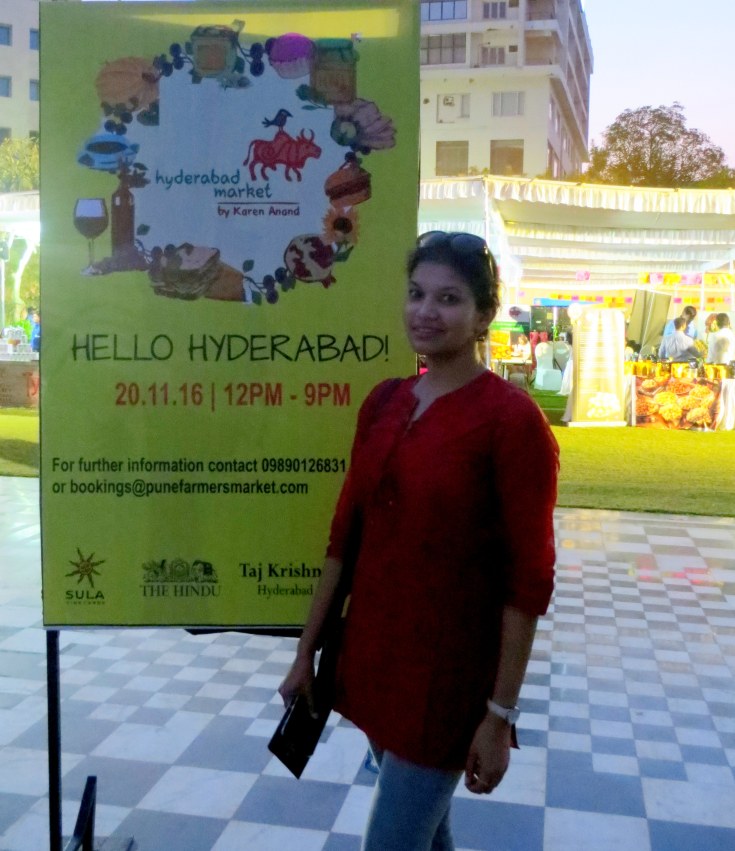